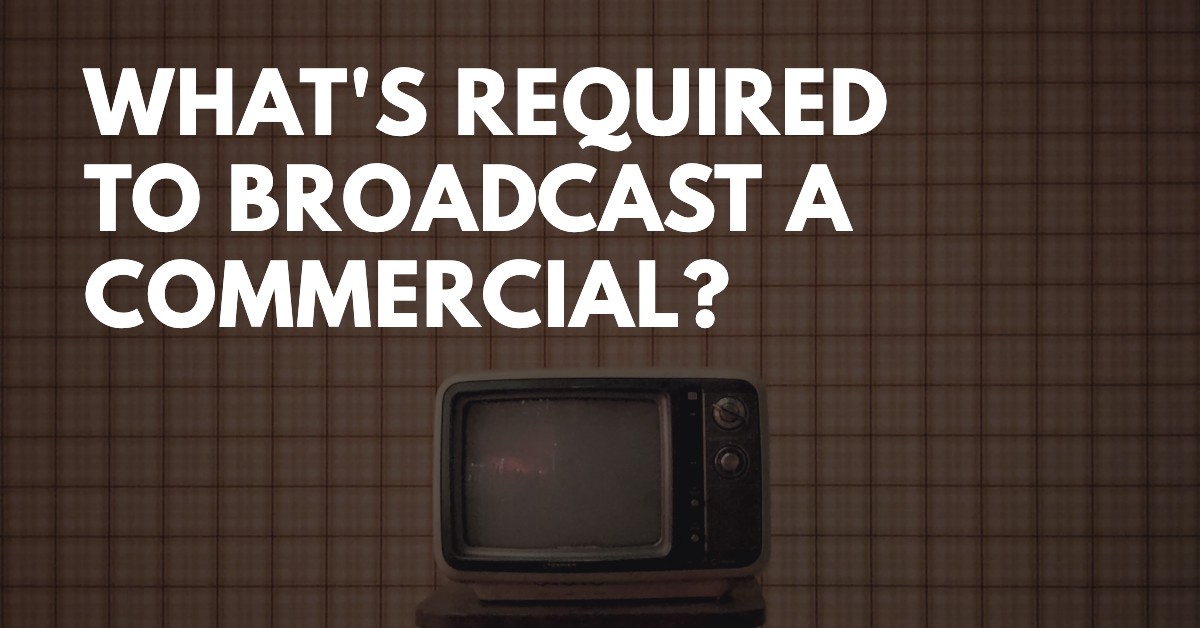 If you’re hoping to broadcast your commercial or PSA on television, there are additional requirements and fees that will need to be considered. This is why it’s so important to plan your distribution strategy before beginning production.

You may have already created a video for use in social media ads, and only later decided that you’d like to also use it for broadcast. It’s certainly possible, but it may be more costly than you’d anticipated.

In this post, we’ll review these additional requirements and costs so that you can better prepare – whether you’re faced with adapting an existing video for broadcast, or are planning a new project from scratch.

You’ll want to ensure that any royalty-free stock music, photos, or video footage used in the project is properly licensed for broadcast. This is typically a much higher fee than a license for publishing only to the web, so it’s likely that you will not be covered if the decision was made only later to use the commercial for broadcast.

A typical broadcast licensing fee for a music track can be anywhere from $500 – $1,500 USD, and will need to be negotiated on a track-by-track basis.

Additional payments may need to be paid to any on-screen or voice-over talent appearing in the commercial. This ideally will have been negotiated in advance, but may not have been if the intended use of the commercial has changed.

Clearance will need to be received from thinkTV to ensure that a video is in compliance with broadcast ethics. This service is free of charge but can take up to 5 business days upon submitting a low-resolution file of the commercial or storyboard and/or script for review. (Rush service is available with as fast as 1-4 hour turn-around, for additional fees.)

Special clearances will be required for approval of content relating to alcohol, food, consumer drugs, natural health, and cosmetics, or when advertising to children.

There may be additional requirements, depending on the type of content. For example, public service announcements (PSA’s) require that the organization’s logo appear at the end of the commercial for a specific length of time at a specific size. Charities and non-profit organizations will need to complete a Letter of Indemnity.

If the spot is making a specific claim, then the advertiser will need to complete an Attestation Letter.

In Canada, Closed Captioning is required on English and French commercials, as mandated by the CRTC. These closed captions will need to be wrapped into a single MXF file with the video. The broadcast will not accept separate closed caption files.

The broadcaster may have recommendations for how the captions are formatted on-screen, such as the number of lines visible on-screen at any one time.

Each broadcaster will have their own document detailing the technical specifications required for the video file. This will include frame rate, video resolution, audio levels, time code, and closed captioning data, as well as any requirements for bars & tone, pre/post-roll, and a slate. There may also be specific file naming requirements. (Watch the video below for an example of a slate.)

Broadcasters will have different instructions for sending them your files. There will be some additional ‘metadata’ that will need to be embedded in the MXF file, along with the video and closed captions. This may include the advertiser name, campaign title, commercial title, video length, language, telecaster approval information, and the ISCI/commercial code.

Revisions to Your Commercial

If any revisions are required to your commercial, you’ll need to re-submit your files along with a new ISCI / Commercial ID. You may also require a new telecaster approval from thinkTV. Ensure that the video has received final approval from all stakeholders before beginning this process to avoid delays.

Our team has handled the preparation and delivery of commercials and PSA’s for broadcast on CBC, Global/Corus, Rogers, APTN, and others. We can handle the creation of closed caption files and other deliverables, as well as help to secure Telecaster Approval. Contact us to discuss your project.