Counterpath Solutions was looking for a way to use video in order to help generate leads for their new communication platform aimed at small to medium sized businesses, building on their #businessworldproblems campaign. They wanted the videos to be funny, but they understood that comedy was a big challenge – especially with video.

After initially exploring the idea of conducting interviews with leadership from their team, we proposed instead a series of skits making light of some of the everyday communication challenges we all face around the office. We brainstormed a series of ideas before narrowing it down to three, and then began a search for local actors with experience with sketch comedy (Angela Galanopoulos & Kyle Fines). Angela and Kyle are improvisational actors uniquely talented in bringing comical characters to life, so we gave them the freedom to improvise a little during filming. Our scripts also called for a lot of set design, but with a little elbow grease and a whole lot of props (including an old Apple II), we built an office set here in our studio.

The success of this video series is a demonstration that laughter is a great way to reach people with video, and our team enjoyed the challenge of bringing these concepts to life with restrictive resources.

Watch all the videos in the series on Counterpath’s YouTube channel. 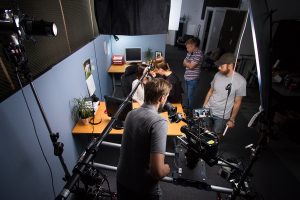 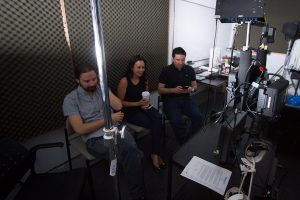