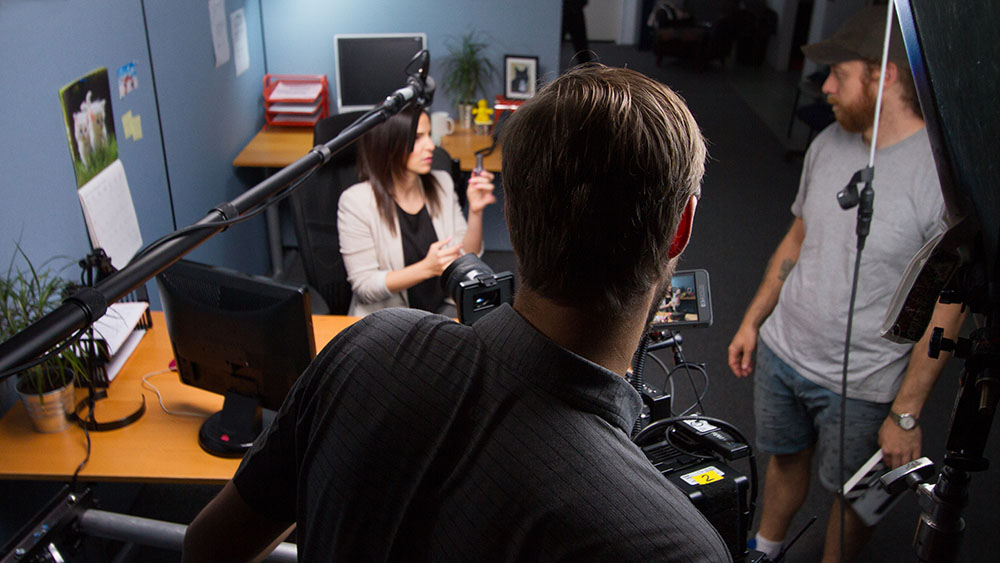 Filming at your office can be cost effective and convenient for those staff members being interviewed or featured in the video, but it can also be quite disruptive to your regular operations and things don’t always go as planned.

Not to worry! There are several ways for your team to prepare so the shoot can go as smoothly as possible.

Filming is typically booked to best work around your schedule or that of the person being filmed, but consider as well if there is a day and/or time which tends to be quieter or less chaotic. For example, we’d want to avoid any large deliveries or shipments when filming in a warehouse.

If we’re filming a specific process or event, make sure that we will not be interrupted by long lunch breaks or other unforeseen events. You wouldn’t believe how many times over the years that we’ve been interrupted by fire alarm tests!

These things always take longer than you might think. By the time the crew has loaded in and setup their gear, moved and setup again in any additional locations required, and finally packed up and loaded out – it’s rarely something that takes less than at least 3-4 hours, and more often a full day.

‘Business as usual’ can present major issues when filming with sound, like when conducting an interview. Fans or A/C may have to be turned off, which can be tricky with centrally controlled air. Be sure to turn off any loud equipment, and to mute or unplug any nearby phones.

One of the most difficult situations can be filming in a room with lots of windows. When in the background of a shot, windows can create a major discrepancy in exposure which often cannot be compensated for. Daylight also has a different ‘colour temperature’ than that of tungsten or fluorescent lighting, which can cause extra work for the crew during setup.

Our team would typically do a location scout prior to the day of filming in order to establish the best filming location(s), making special note of any potential sound or lighting issues.

The front desk, security, and of course anyone who is supposed to be on camera should be made aware that filming will be taking place. It is a good idea to warn even those not involved in the shoot in order to avoid interruptions such as loud noises and doors opening during a shot.

If possible, have an additional staff member available to direct traffic in busy areas of the office. It saves having to station a dedicated production crew member, and it’s something that can be handled better by someone who knows your team.

Are there service elevators available? Are security or parking passes required? Please make us aware of any special instructions for our crew to unload their equipment and gain access so that they may setup and and begin the shoot on schedule.

There is nothing worse than having a tight shooting schedule with an unrehearsed on-screen talent. Please make sure that everyone who will be appearing on camera has had a chance to adequately prepare. They will be much more relaxed, and the day will go much more smoothly.

Care will be taken to avoid filming anyone who may not have given consent to be on camera, such as customers in a retail environment. Be sure that anyone who has agreed to appear on camera is prepared to sign a talent release form.

Read more: Ready for your close-up? How to look good on camera

Clothing is far from the most important consideration, however there are a few things to avoid if possible. Particularly, dress shirts with very tight stripes should not be worn as this can cause the pattern to ‘dance’ on-screen due to the way video is captured in horizontal lines. It’s usually also best to avoid plain white clothing, as this can appear to be over-exposed in some lighting scenarios. When in doubt, simply bring a spare change of clothes as a back-up option.

In cases where budget restrictions do not allow for a make-up and hair person to be provided, you may want to bring a brush or comb to keep those pesky strands at bay. Our crew will typically have a basic powder kit on hand to reduce any shine caused by the lights, but women may want to bring their own make-up and possibly some hair products to manage this on their own.

Notify Us of Last Minute Changes

The most important thing is to keep us up to date on any last minute changes which arise in regards to any of the above. Our team is very flexible and accommodating, but only if we are properly prepared can we ensure that the project is completed on time and on budget.

To learn more about how we can film at your office, contact us to today for a free consultation.