What Can Businesses Learn from Successful Creators on YouTube? 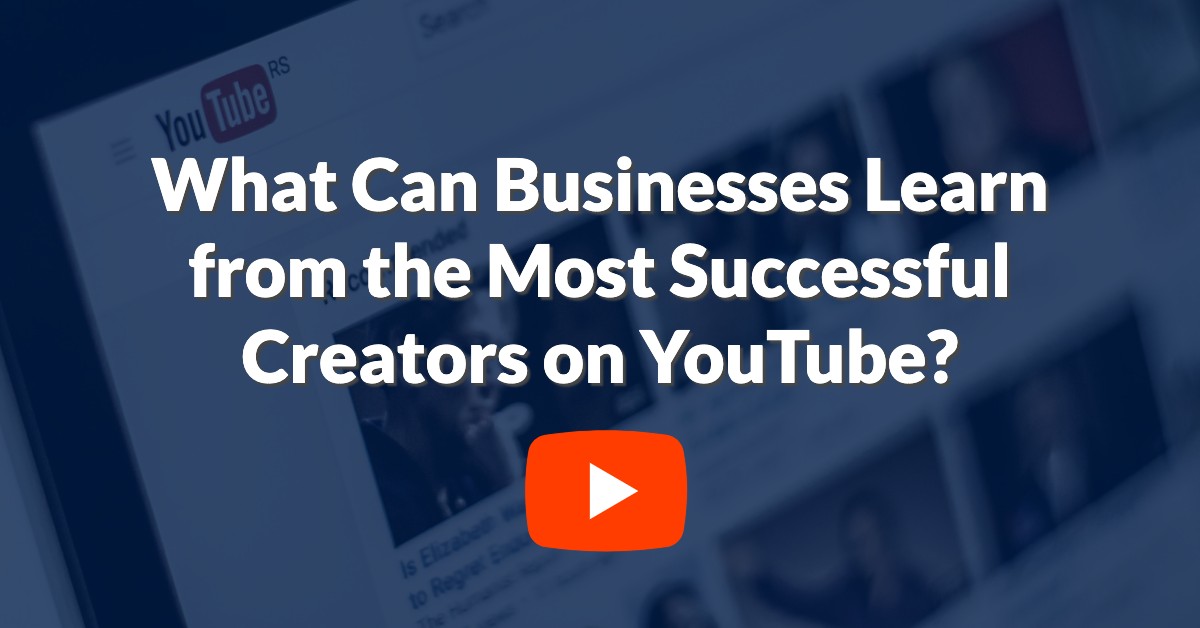 What Can Businesses Learn from Successful Creators on YouTube?

YouTube is the second largest search engine, next to it’s bigger brother, Google.

The fact is that we’re addicted to the video platform. A whopping 80% of North American adults reportedly watch at least 1 video on YouTube each month. In the US, YouTube reaches more 18-49 year-olds than any broadcast or cable TV network.

As marketers, we feel pressure to ‘get on YouTube’ for all of these reasons and more. But most businesses struggle to achieve measurable results.

Sure, there are many potential benefits to publishing video content on YouTube. But there are also many challenges. Consider the following:

It’s no wonder that businesses who are new to the platform struggle to make a dent.

The biggest mistake though that businesses make on YouTube is to approach the creation of their video content with only their own goals in mind. We need to instead consider the goals of both the viewer and the platform.

How Do Your Viewers End Up on YouTube in the First Place?

Viewers can end up watching a video on YouTube in one of several ways.

Many of us end up on the platform by clicking a link from another website or social media platform where a video was posted. We might stick around to watch a suggested video, but likely will go back to whatever we were doing once the video is done.

There are also times when we’ll head straight to YouTube to look for help in solving a problem. I know that I personally tend to start my search on YouTube.com when looking for something that might lend itself more to a visual demonstration than a written explanation. For example, if I’m trying to figure out how to set up and use my fancy new drone for the first time, YouTube would be my first stop. I’m also partial to YouTube for product reviews, such as a comparison of a GoPro action camera to one of the older models.

Of course, the majority of searches are still done on Google’s homepage. We’ll often find ourselves on YouTube after clicking on a ‘video snippet’ from a Google search while looking for answers in any format – video or otherwise. Google’s algorithms have become adept at knowing when to serve up video results along with regular text results or images, based on the likelihood that you’ll click on them.

It’s important to ask yourself, how do you expect viewers to discover your video content on YouTube? Is it the kind of content someone might search for, or will you be relying on YouTube to recommend it to viewers who are already on the platform?

Your Goals & YouTube’s Goals May Not Be Aligned

Businesses often approach content with only their own goals in mind. But you need to consider not only the goals of the viewer (the problem they’re trying to solve) but the goals of YouTube as a platform

Ultimately, YouTube is trying to generate revenue from ads. It’s estimated that the platform serves an average of one ad every 7 minutes of viewing time.

It stands to reason that the more visitors you can help YouTube to attract in the first place, and the longer you can help keep them there, the more ad revenue you can help the platform to generate. If you can keep those visitors coming back for more through subscriptions and promotion on other social media channels, even better.

What’s not included in the list above are things like helping your business to generate leads by converting traffic off the platform to your own website. While that might be your primary goal in using YouTube in the first place, it actually works against YouTube’s own goals by limiting the number of ads it can serve.

YouTube has become a launchpad for an entire generation of celebrities and personalities. The Top ‘YouTubers’ have generated millions of subscribers by regularly posting videos to YouTube and forming what can feel like a personal relationship with their fans. This includes everything from comedians and musicians, to video game streamers and product reviewers.

So just how do these YouTubers make money from the platform?

The most obvious source of revenue might be from ads on YouTube itself. But this generates less revenue than you would think. The amount can vary based on a number of factors, but YouTube publishers receive an average of $18 per 1,000 ad views, which equates to $3-$6 per 1,000 video views. This means that a publisher would likely need to generate well over a million monetized views per month to make a living.

Many publishers have begun to ask their viewers directly for support. Platforms like Patreon allow creators to offer extra incentives in exchange for a monthly membership fee, and YouTube itself has recently begun rolling out its own membership program for eligible channels.

Some creators have taken their businesses to the next level in selling content ‘upgrades’ such as eBook downloads or other educational content, as well as merchandise and branded products. Paid partnership and sponsored content can also be much more lucrative than simply running ads through YouTube’s standard advertising model. For example, if your channel features tutorial videos on how to build your own furniture, then it might make sense to partner with a home supply retailer or tool manufacturer.

In fact, why not license and sell your own line of tools? Celebrities do this all the time by attaching their name and brand to a clothing line, perfume, or vodka.

The trick to the success of any popular YouTube creator (or celebrity, for that matter) is that fortune follows fame. Many creators have generated large followings almost by accident in some cases through a combination of luck, creativity and hard work – that is to say, fame (and the riches that followed) wasn’t necessarily part of some master plan. It’s only once their audience has grown to a certain size that monetization strategies even become an option. But it always starts with great content.

There’s no reason that your business couldn’t follow a similar strategy to some of the most successful YouTube creators. But similarly, it needs to start with content that your audience will find valuable. Generating amazing content is not a step that you can skip and simply throwing money at the problem won’t help.

The trick may be to start with the end in mind and to reverse engineer the success of some of the top YouTube creators.

Viewers on YouTube don’t necessarily subscribe to brands, they subscribe to creators. There are cases where brands are themselves known as content creators, but this tends to be rare outside of specific industries such as apparel and sports (think ski manufacturers).

Remember the example above of the YouTube channel that teaches you how to build your own furniture? Success for this creator may have meant a partnership with a major tool brand. If you happen to be a tool brand, you have two options: Either try to create a channel from scratch with your brand as the sponsor or; partner with an up-and-coming YouTube creator to sponsor their existing channel.

Or Take the Shortcut to Lead Generation

What if you just want to generate leads now? Well, YouTube does offer one great shortcut – paid advertising!

Paid ads can be placed on YouTube in a variety of formats. You can even target past visitors to your own website with ads while they’re on YouTube as part of a re-targeting strategy.

This is perhaps the quickest path to generating impressions and leads on YouTube. But it’s far from what would be considered a YouTube channel strategy. Think of this more like running a commercial during the Super Bowl, as opposed to trying to start your own football league.

A YouTube channel strategy requires a significant investment in the production and promotion of content that is helpful, funny, entertaining, or inspirational. Whether you create that content from scratch is up to you, but the value of that content to the viewer is, ultimately, what will determine your success.

Learn more about How Your Business Can Succeed on YouTube by watching this webinar recording. 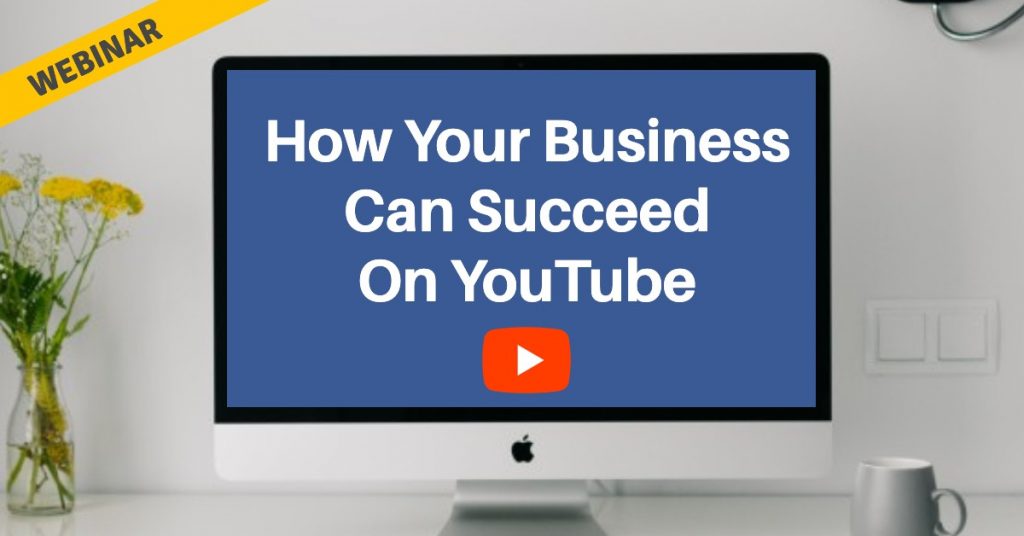