When Should You Use a Teleprompter? 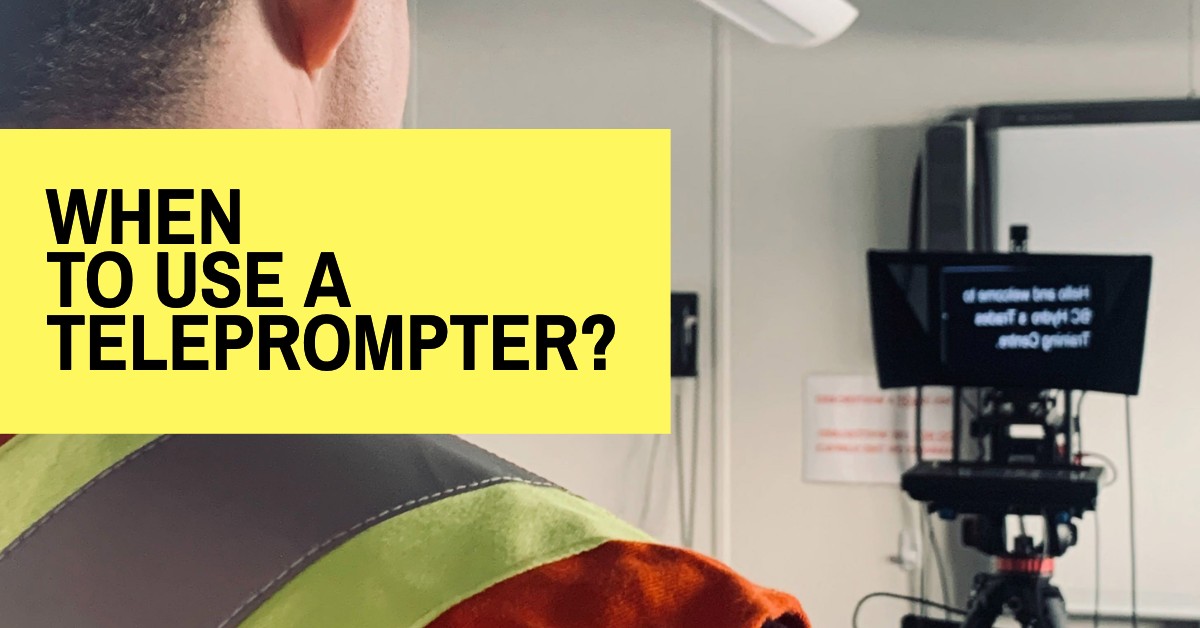 When Should You Use a Teleprompter?

In speaking to clients about their videos, there’s something that we often hear. In an attempt to make their videos feel more authentic and less scripted, they hope to avoid using a teleprompter and, in some cases, avoid scripting at all.

While it’s true that relying on a teleprompter can sometimes make a video feel overrehearsed, there is a reason why they’re such a commonly used tool in video production. The pros usually outweigh the cons.

How does a teleprompter work?

A teleprompter is a fairly simple device that is installed in front of a camera lens to reflect text back at the speaker. Because of the type of glass used and the angle at which it is installed, the text reflects and is visible to the speaker but does not refract and therefore remains invisible to the camera. This enables the talent to read the script while maintaining a fixed eye-line directly into the lens of the camera. 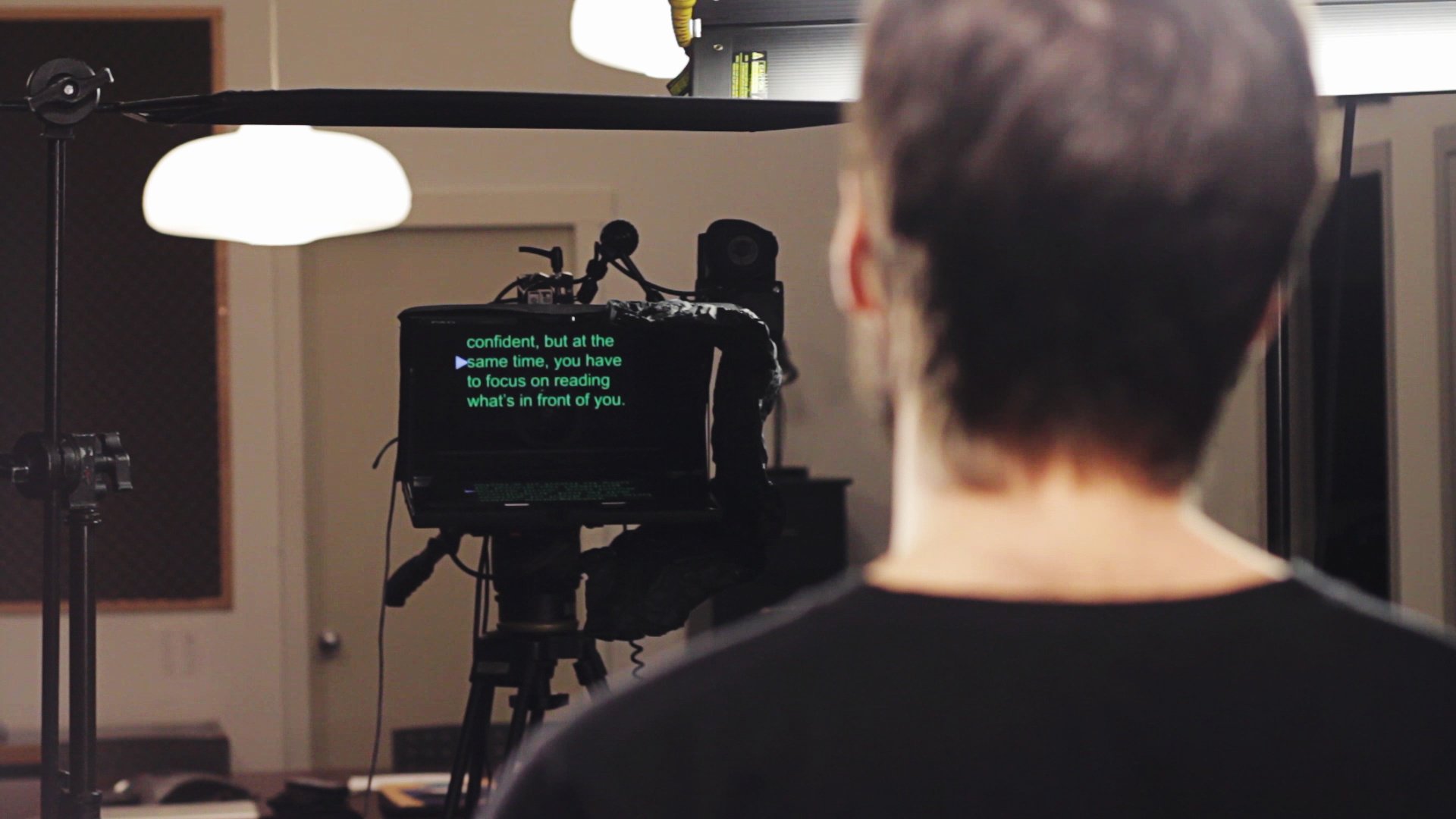 Modern teleprompters are much more portable than older models, relying on iPads instead of a laptop and secondary monitor. They can typically be controlled by an app on a mobile phone. Some are even voice-activated so the speed can automatically adjust to keep up with the person speaking.

The argument against using a teleprompter

Read more: Tips on How to Read from a Teleprompter

The most popular creators on YouTube likely don’t read from a teleprompter, but they also are the outliers who have honed the skill of improvisation over many years. They aren’t collaborating with multiple stakeholders, nor are they dealing with sensitive messaging. So it’s less a question of whether they’re using a teleprompter and more about to what degree they’re scripting at all.

When it comes to corporate marketing and communications, a detailed script is simply a necessity.

The benefits of a teleprompter

When a person is required to speak directly to the camera, cue cards or other memory aids can’t really be used since the smallest shift in eye-line can be quite noticeable. The problem is that all but the shortest scripts will be too long to be memorized even by a highly trained actor. That’s where a teleprompter comes in.

It allows you to film more complicated scenes

When a video is highly scripted, you’ll be able to incorporate more complicated camera movements or ‘blocking’ in a scene. You could also script more engaging transitions between scenes.

For example, imagine the concept was to do a ‘walk and talk’, with the speaker walking down a hallway as they spoke, stopping on a mark, and then interacting with another person. The timing would have to be perfectly planned out for this shot to work, and for that, the dialogue will need to be scripted as well.

Using a teleprompter allows you to shoot multiple takes without the speaker forgetting their lines, allowing you to focus on the literal ‘moving parts’ instead.

It minimizes the risk of having to re-shoot

Some of our clients are confident that their CEO (or other staff member) who will be speaking on camera is just so comfortable with the material that they’ll be able to deliver their lines without the need for a detailed script, let alone a teleprompter. “She does this all the time,” they’ll often tell us. “She’s got this stuff memorized.”

The reality is that speaking on stage in front of an audience is very different than speaking to a camera. Having 20 minutes to discuss a topic in detail is also different than when you’re trying to concisely deliver the same message in 2 minutes, and while a live audience might be more forgiving of the odd ‘umm’ and ‘uhh’, when watching a video online our expectations tend to be very different.

The risk is that the resulting video is too long and potentially completely unusable. There, unfortunately, have been instances where we’ve had to reschedule another day of filming once the speaker realizes that they in fact will require a script and teleprompter.

Another risk of trying to speak ‘off the cuff’ is that you’ll say the wrong thing. Without a script, there’s no way for the director or script supervisor to keep this from happening. This too can lead to the need for reshoots.

Reading from a teleprompter is simply faster than trying to memorize and recite a script. When trying to memorize lines, it almost always takes longer to get it right. This means that less can be filmed in a day and that what should be quick and efficient can become a long and frustrating process.

It allows you to film longer takes

Trying to film without a script can quickly lead to having to scribble notes on a piece of paper to act as a make-shift cue card. This almost always results in having to break the scene up into shorter segments as the speaker attempts to memorize smaller pieces of dialogue. That can lead to a lot of additional cuts and the need for more b-roll.

There’s one other difference you’ll notice when watching those vloggers on YouTube we discussed earlier who film without a script. In many cases, they do a lot of cutting – a technique referred to as ‘jump cutting’. If this is the style you’re going for, then great, but it’s typically not the case with more professional presentations.

When not to use a teleprompter

A teleprompter should really be used anytime someone needs to speak directly to camera, unless they have a lot of proven experience doing so without the use of a prompter.

The only time we wouldn’t recommend using a teleprompter is when the dialogue is meant to be truly conversational. This includes any type of interview, whether the interviewee is looking directly at the lens like on a Zoom interview or if they’re looking off-camera at another person.

Something to keep in mind is that just because you have a teleprompter doesn’t mean you can’t also film a take without it. In many case, once we’ve got a good take, we’ll suggest that the talent try one in their own words. In case that doesn’t work out, we’ve got the teleprompter to fall back on.

Contact us to discuss your next project, and whether a teleprompter is appropriate or not.